‘Hippy Brian’ died suddenly and unexpectedly at home on New Year's Day 2014. He had attended the Edward Carpenter week entitled On Being Human the previous autumn at Laurieston Hall where this photo was taken. Organiser Rob Francis said “Brian was a long-standing ECC member who’s been described as one of the last hippies; a man of great integrity. Here is a photo of him from the start of the week, with his usual playful, ready-to-stir-things-up twinkle in his eye. I remember taking the photo, and hear his voice loud and clear, as if it were yesterday.”

His funeral was held at Islington in London, attended by ECC members and friends, and a selection of the readings are below. His ashes were scattered at several places special to him - including the Isle of Harris, and at Laurieston Hall. 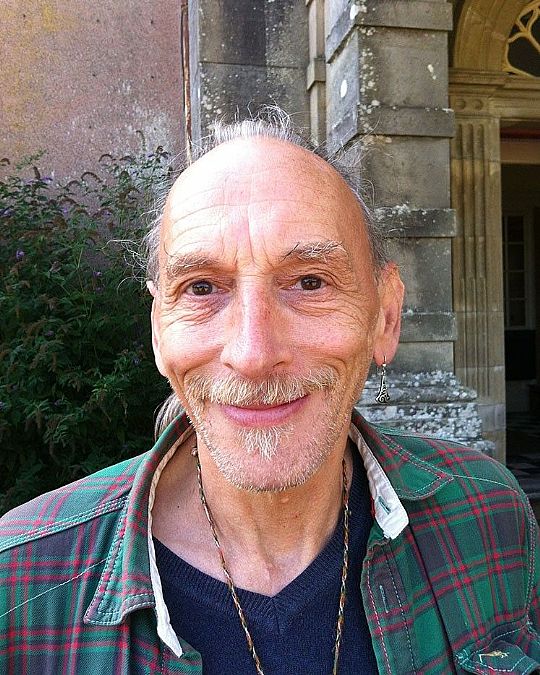 “Many years into our friendship I told Brian that when I first met him, he really scared me!

I wasn't a very confident person then and it was the way he could - and would - look through and past my eyes, into my very being, ignoring any and all my ‘masks’. It took me a short while to realise this was in no way threatening, but rather it was his genuine openness and love of deep communication. He is (and the word ‘is’ feels completely correct, I don't mean ‘was’...) very special to me. I learned many lessons from him, and I think we shared a few together. I will continue to learn from him.

Each time we met, even if it was a long time since the last, we would re­connect, just as, if not more powerfully than the previous times. I feel incredibly lucky that we shared what we did together over the years. A very, very special man.”

“When I arrived at Laurieston Hall for my first Gay Men's Week in 1991, it was a big scary place full of scary London queens. The pink stoned hippy glued to the sofa made me very welcome and relaxed throughout, and it's partly due to him that I came back the next year. RIP dear xxxx”

“Brian was with me at Manorbier the year I helped organise it. I had a really good chance to get to know him at Featherstone Castle in 2012 and all his pioneering work with organic food and healing over many years. He was a really good cook for the community with instinctive ideas. God bless you Brian as your soul goes on to a be a little star in the night sky. You made a difference and helped make me who I am.”

“In the bad old days - before Brian came out!

I met Brian in 1976 when he was 24.  The attraction was immediate - and longlasting! Soon after we got together, he took me out for dinner at a proper restaurant because, he said, there was something important he had to tell me. “I think I might be gay!” Usually we went for a curry in Bradford for a meal out.

We lived together for ten years, working together for seven of those.  We were friends for over thirty-five years. When I met him, Brian already had a deep interest in the natural world, and taught me a great deal. He knew so much about the local wildlife, and a walk with him was always interesting.  He also loved reading science fiction and would spend hours, oblivious to the outside world, with his head in a book.

We were living in the town he grew up in, and he knew many of the local people.  He was a keen darts and dominos player in his local pub and sometimes played for the team. He also loved the pinball machines and had an ongoing competition with a friend to see who could get the highest score each week - there were free pints for the winner!

Brian’s main sporting activity was cricket.  Every summer, Saturdays were a ritual that never altered, culminating in this man in his immaculate whites standing with his team on the pitch.  Brian usually fielded, sometimes bowled, and batted occasionally.  Every match was analysed in great detail - usually over several pints - and there were practices twice a week. Brian was fiercely, and seriously competitive then.

In 1976 Brian was working at a Youth Hostel. He then took a job locally so we could live together.  When friends decided to set up a wholefood shop in 1977, we joined them. The shop was in a back-to-back house in a street off the beaten track.  Food could be sold straight from sacks and boxes, and we hand-mixed our own muesli. Brian loved good food  and was also very good with customers. He could persuade people to try new and different things. There was one man who came in every Friday evening to stand talking with Brian for half an hour about a wide range of subjects.  Brian seemed to know something about everything! The shop was a great success for seven years and we worked together well. When the shop closed, Brian went to work for Suma.

In 1986, we were struggling. I eventually told him he had to go - he needed to work out stuff about himself that had nothing to do with me. Years later, he thanked me for throwing him out. He went to Blackpool, and the rest, as they say, is history...”