Dr Clifford Williams shares his inspiration for researching the history of gay youth groups in the early years after decriminalisation, culminating in the publication of his book Courage to Be: Gay Youth in England, 1967-1990. 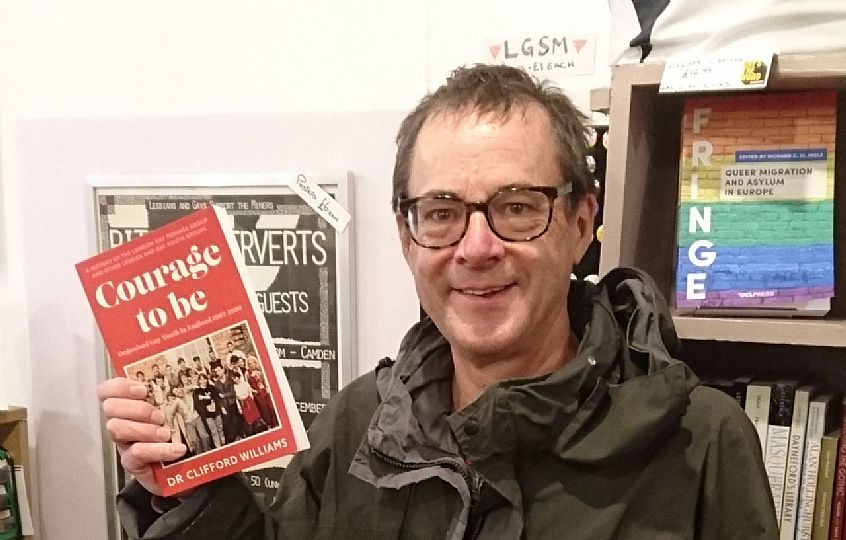 Clifford Williams launches his book at Gay's the Word in 2021

In 2017 my interest in gay and lesbian history was ignited by the events and television programmes commemorating the 50th anniversary of the Sexual Offences Act 1967. That year I was doing some research in my local county record office (on women police history) and noticed a card in the room where researchers take their sandwiches. The card from an LGBT Youth Project was asking for people who grew up as lesbian, gay, bisexual or trans in the 1960s,70s, 80s or 90s to be interviewed by young people. I responded and a few weeks later Kobe interviewed me in Fareham about growing up gay in the 1970s. This interview is now deposited, along with 17 others (including Patrick Gale and Richard Kirker), in the Hampshire Record Office (listening copy ref AV1637/S1).

After telling Kobe of my time at school, discovering Gay News (in my local library where it was kept behind the desk), and how I found the London Gay Teenage Group (LGTG), I decided that the uniqueness of that gay youth group was something worth researching. What happened to the group and the people I knew back at the end of the 1970s, I wondered? A few years earlier (around 2005 I think), I’d had a vivid dream where I saw a group of those gay teenage friends in a cafe in London and wanted to go in but somehow in the dream I was still outside.

So I embarked on finding out, contacting, through the Internet, people I knew who were involved and in turn they put me in touch with others. And a few people had even kept documents relating to the LGTG (valuable ephemera for researchers). Sadly and inevitably that journey of discovery led to news that some of those people had died. One of those who I found had died from AIDS was Robert Halls from Carshalton (one of the early organisers in the group).

However, it was very exciting and lovely to reconnect with people who I had not seen for nearly 40 years and who had survived. I had left London in 1983 and never returned except for occasional visits. In the summer of 2019 I organised a reunion picnic and about 25 old LGTG attenders turned up to reminisce.

I spent many hours looking in archives, especially useful were the Hall Carpenter Archives (HCA) in the London School of Economics. In addition some of those who had kept documents were glad to send them to me and for me to get them deposited in archives. Additions were thus made to the HCA, the London Metropolitan Archives, the Bishopsgate Institute and the Islington Local History Centre.

I widened my research beyond the LGTG to examine which other organised gay and lesbian youth groups and organisations existed up to 1990.

After 4 years the result of this research has been published in a book charting how the few gay and lesbian youth groups that existed in England in the 1970s and 80s came about. You may have attended such a group and if so will undoubtedly recognise some of the people mentioned in this book. Or, like the majority of young gay people growing up in that era, found nothing catering for young people of like sexual orientation in your area. However, for many there was at least a valuable link through the pen pal schemes. Did you have a teenage gay pen pal? Mine lived in Glenrothes. I am afraid that I no longer remember his name, but I do know we discussed penis sizes in our correspondence! Of course letters like that were usually destroyed!

In the mid 1970s the Campaign for Homosexual Equality (CHE) ran a campaign to lower the age of consent for gay sex to 16. Alongside that campaign, CHE also set up the first groups for under 21 gay youth. But many in CHE were nervous about that work as there was a threat of prosecution for ‘corrupting public morals’. With the reluctance of CHE to commit support to gay teenage groups, Phillip Cox (1956-1992) and Paul Welch broke away from CHE and ran a group in London called the Gay Teenage Group. This unique and ground-breaking unofficial youth group was run by its members. It started meeting in  Holloway Road, London, in 1976 (at premises of the sex education service Grapevine). Although some young women attended the group, the need for a separate lesbian group was recognised and this was established in 1979.

In 1979 the London Gay Teenage Group moved to premises in Manor Gardens, N7. Today there is a pink plaque at the entrance to the Manor Gardens Centre (put up by Islington Pride). 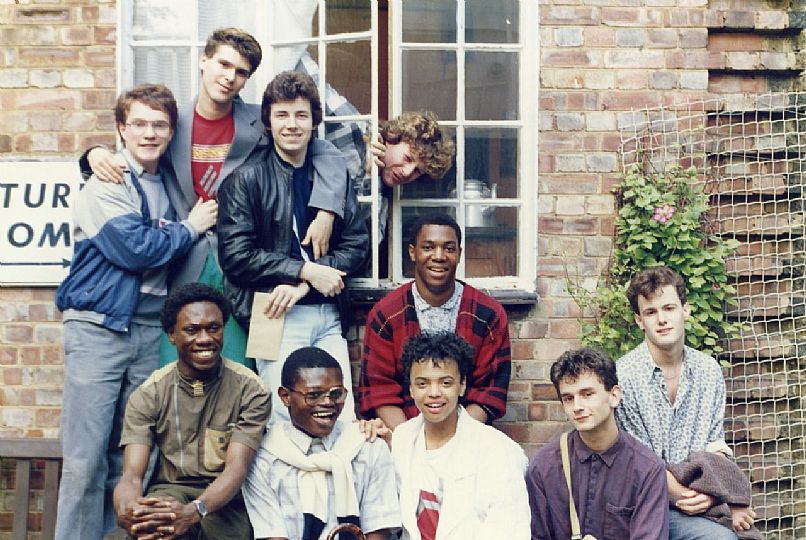 Gay teenagers at Manor Gardens in 1984

Gay News listed the LGTG and a few other gay youth groups that had started to emerge in cities like Liverpool, Manchester and Leicester. Some found their way to the groups through those listings, others through ringing Gay Switchboard, whose number was on the covers of the vinyl records of the Tom Robinson Band.

In recognition of the need for more gay youth groups, people like Micky Burbidge, a civil servant, established the Joint Council for Gay Teenagers (JCGT). The JCGT helped people to set up other gay youth groups around the country. After a couple of years they handed over their role to a new voluntary  organisation called the Gay Youth Movement (GYM). GYM catered for a wider age range and accepted young people up to the age of 26. So around the country some gay youth groups were for young people up the age of 26, while in other areas they were restricted, like the LGTG, to 16- under 21 year olds.

The LGTG managed to get officially recognised by the Inner London Education Authority in 1979. This enabled the group to apply for some funding and in 1983 they appointed a part-time paid youth worker. But the group was always led by the members.

The London Gay Teenage Group history is presented against the backdrop of the wider social and political landscape of the times in my book. The group undoubtedly survived thanks to the support it received from the radical left council in the Borough of Islington. Islington and Camden boroughs went on to support many other gay and lesbian young people through the ‘North London Line’ (not to be confused with the rail line).

While London was the centre for so much activity, other cities and towns are also included in this book. Newcastle, Hull, Stoke, Telford, Southampton and many more feature in the history.

I believe that my book fills a gap in LGBT history.